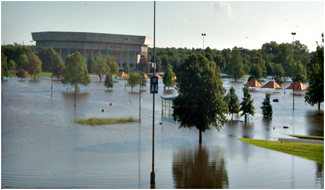 I.S.U. vice-president Warren Madden says inside Hilton Coliseum, the basketball floor is floating on water ” Water was probably four feet deep at the floor level — which is up roughly at the height of the scorer’s table….if that gives you a reference point. And water was still coming in through the stairwell,” Madden says.

But Madden says the damage won’t be as bad as in 1993, when water reached the parkay level in Hilton. The campus remains open, although some operations are limited because employees were unable to get to work due to street closures.

Madden said water also entered the Scheman Building nearby. “On the lower level of Scheman, what we call the ground floor, has water in it. There’s water in Benton Auditorium. The extent of the damage until we get the power back in the building we won’t know.”

Residents of the city of Ames were awakened at 5 a.m. by the city’s emergency alert system. Evacuees around town quickly filled up one emergency shelter, and another was opened. Several roadways remain under water and closed, including highway 30 and I-35 south of Ames.

Elsewhere in the state, high water is threatening I-80 near Colfax. Officials say closing I-80 may be necessary later today. Some county roads near Colfax are impassable