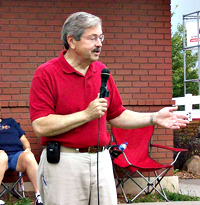 The controversy surrounding extravagant spending in the Iowa Alcoholic Beverages Division is now part of the debate between the two candidates for governor.

A recent audit found the former administrator of the Iowa Alcoholic Beverages Division bought expensive artwork and quickly promoted someone through the ranks, from an internship to operations manager.

“What Terry Branstad is saying he would do if he was governor now is inconsistent with what he actually did in a very similar situation when he was governor,” Stanley says. “And that’s just not being honest with the people of the state.”

Stanley says Branstad failed in 1984 to fire two officials in what was then the Beer and Liquor Control Department. Those two officials were accused of having an affair and making questionable spending decisions. Branstad says he didn’t have the authority to fire those workers, as the hiring and firing back then was the responsibility of the commission that oversaw the agency, not the governor.

“I mean, obviously they don’t know a lot about history and what could be done at that time, so I really wasn’t in the position that I could directly control that agency or, frankly, many of the other agencies of state government,” Branstad says.  “But we corrected that with reorganization in 1986.”

Culver’s campaign manager says Branstad is being a “hypocrite.”

“I think that Terry Branstad had more influence than he probably is saying in this,” Stanley says.

Branstad counters that Culver has failed to properly manage more than just that one division, as even more problems in the Iowa Film Office mean state taxpayers may be “on the hook” for tens of millions of dollars. “I just think Iowans want to restore hands-on management,” Branstad says. “And they want to have honest, open, clean government.”

The Culver campaign presented reporters with a series of 1984 newspaper articles. One article showed the two Beer and Liquor Control officials who were cited in an inspector general’s report were not fired, but merely suspended from their jobs for 30 days.