You are here: Home / Fires/Accidents/Disasters / Newton man honored for life saving actions on I-80 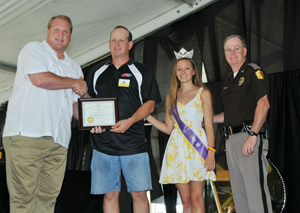 A Newton man who has twice pulled someone from the wreckage of an accident along Interstate-80 has been honored with the governor’s lifesaving award.

The award recognizes people who are not in law enforcement, but perform selfless and courageous acts in order to save someone’s life in an emergency.

Brian Schwenker of Newton was honored for rescuing a woman from a burning vehicle after it became wedged in the wheels of a semi on Interstate 80.

“It was upside down and on fire and I got pulled over into the grass and got out and and ran over there, got the door open, crawled inside of the car, found the seatbelt,” he says.

“She was upside down haging from the seatbelt. Got her unhooked. She kind of fell to the roof and she hollered at me to be careful. And I was like, well, ‘I can’t really be too careful. Your car is on fire.’ And I was able to get her drug out and at that time another passerby had stopped to help me get her away from the car before it got too bad.”

The accident happened this past March and Schwenker was among the 17 Iowans who were honored with “lifesaving awards” during a ceremony last week at the Iowa State Fair. It is the second time Schwenker has pulled someone from a wrecked vehicle. During a previous commute on I-80, he pulled a driver from a truck that had run off a road and become partially submerged in water.

Schwenker says he doesn’t consider himself a hero and wishes more people would respond the same way.

Photo courtesy of the Governor’s office