You are here: Home / Education / ISU says flood recovery will be a long process

Iowa State University officials today said some 500 outside contractors with 600 pieces of equipment are at work on campus cleaning up facilities damaged by last week’s record flooding. The university is spending  $18,000 a day on fuel for generators to power fans, power sprayers and other equipment needed for cleanup.

I.S.U. president Gregory Geoffroy, says they are prepared to get the fall semester underway on Monday. Geoffroy said the recovery phase will take awhile, probably well into the fall semester. He says while they are working on the recovery, they are at the same time welcoming the largest enrollment in the history of the university.

Over two dozen university buildings suffered some kind of damage from wind storms, heavy rain or flooding. But I.S.U. vice president Warren Madden says the academic buildings were spared the major damage of some of the sports facilities.

“We believe the majority of the campus areas that students need to have access to will be able to respond to their needs, and we think the fall semester will go well,” Madden says. Madden says they still aren’t ready to put a price tag on the damage yet. 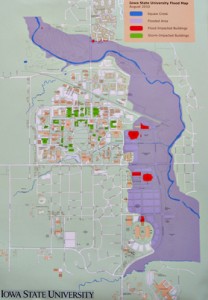 Madden says they have been meeting with members of the State Homeland Security Division, which interfaces with FEMA and they expect FEMA to have people on campus next week. Madden says the presidential disaster declaration will help pay for the damage, but it also requires them to slow the process in some cases to ensure all the paperwork is filed.

He says they want to move as rapidly as they can to get all the facilities operational, but at the same time they need to be sure they file all the needed paperwork for insurance claims, and for FEMA to be sure they are following proper procedures. Madden says a couple of the big tasks are getting the power back on to Hilton Coliseum and the Scheman Building.

Madden says they should know more about a dollar figure on the damage next week after FEMA visits — and said it is expected to be in the millions.