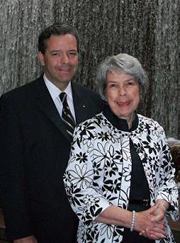 A best-selling novelist who writes mysteries with her adult son will be in Iowa City today to read from their newest collaboration. Caroline Todd is co-author of “An Impartial Witness,” about a British battlefield nurse serving in France during the First World War.

In an interview with Radio Iowa, Todd says she grew up in the South and got hooked on the art of storytelling long before there was television, i-Pods or computers. “The family would gather on the front porch in the evening when it began to cool off and talk,” Todd says. “The elders would talk about growing up or things they remembered. You get accustomed to stories about real people. You get accustomed to the idea that people share their history.”

She recalls her grandfather discussing his recollections about Civil War veterans and realized early on, she wanted to be able to share her own stories — as a writer. It took decades, but Todd eventually convinced her son, Charles, to work with her on crafting a fictional tale — what became the first of more than a dozen books they’ve written together. Todd admits, the mother-son novelist combination is unusual, but for them, it’s succeeding.

While she lives in Delaware and her son lives in North Carolina, they create their stories together via email, instant messaging and the telephone. The duo’s books all take place nearly a century ago, either during or just after World War One. Todd says that global conflict was a pivotal event in the 20th century, but hardly anyone writes about it any more.

Todd says, “The more we got into it, the more we realized that the material was very rich and yet had a great deal of influence on how we see things, even though a hundred years have passed.” Todd will sign copies of her books at Prairie Lights in Iowa City at 7 P.M. Learn more at “charlestodd.com”.