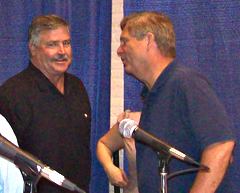 The Iowa Farm Bureau’s delegate assembly has endorsed the idea of replacing direct government payments to American farmers with a new system that would use government subsidies for a “revenue assurance” program that would provide insurance against crop and livestock losses.

Farm Bureau president Craig Lang says that kind of risk management could be the new “safety net” for American farmers. “The discussion around the Farm Bill lasted nearly three-and-a-half hours and we heard everything from improving the safety net towards what if we took the Farm Bill away and food prices increased and we had amendment after amendment, but during all that discussion, the change on direct payments stayed in,” Lang says. “And I really think that was driven by our farmers’ concern about the growing federal deficit.”

Lang says the Farm Bureau members envision a “qualified revenue protection product” — either totally or partially guaranteed by the federal government — that would better serve the needs of farmers. “And that’s what our farmers talked about,” Lang says of Friday’s discussion among delegates at the Iowa Farm Bureau’s meeting.  “They gave examples of homes and people that insure homes and how, if they had to insure their home the way we have to insure our crops, they wouldn’t be happy.”

Iowa’s Farm Bureau is the first Farm Bureau organization in the country to endorse the idea of doing away with the seven-decades-old tradition of direct payments to American farmers.

The average direct government payment to an Iowa farmer last year was $9500.

“The truth of it is our farmers really felt like if you could take a part of it and they could go purchase an affordable insurance product that in fact would give them the kind of security they feel like they need in a year like this when the crops are flooded out,” Lang says, “when the nutrients are lost because of continuous rains.”

Lang admits the idea may not be popular in other areas of the country.  Cotton farmers, for example, are ardent supporters of the direct government payment system.

The next rewrite of the Farm Bill is due in 2012. Lang hopes to convince of other state Farm Bureau organizations to endorse the change Iowa’s Farm Bureau has endorsed so it can be debated at the American Farm Bureau meeting in Atlanta in January.