You are here: Home / Military / Two soldiers with Iowa ties to be awarded the Medal of Honor 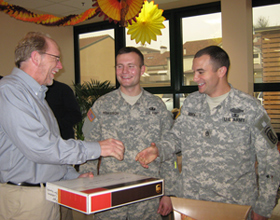 Staff Sergeant Miller was 24-years-old when he died on January 25th in Afghanistan from small arms fire. The White House says Miller “displayed immeasurable courage and uncommon valor — eventually sacrificing his own life to save the lives of his teammates and 15 Afghanistan National Army soldiers.”

The White House has also confirmed that a soldier from Hiawatha will be the first living soldier to be awarded the Medal of Honor for service in Iraq or Afghanistan.

The White House says Salvatore Giunta distinguished himself by acts of gallantry at the risk of his life above and beyond the call of duty while serving as a rifle team leader with 503rd Infantry Regiment during combat operations in Afghanistan on October 25, 2007.

Giunta, a Cedar Rapids Kennedy High School graduate who served two tours in Afghanistan, prevented a wounded fellow soldier from being dragged away during a fire fight while exposing himself to enemy fire. The White House says President Obama talked with Giunta and informed him he is being honored. Guinta is now 25-years-old and is currently based in Italy.