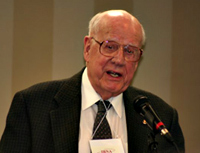 Jack Shelley at the 2006 IBNA convention.

Legendary Iowa broadcaster Jack Shelley has died at the age of 98.

Shelley got his start in journalism in 1935, working three months for the newspaper in Clinton, Iowa, before being hired at WHO Radio in Des Moines. In 2004 — at the age of 92 — Shelley reminisced about his 70-year career in journalism during a speech to the Iowa Broadcast News Association. Shelley talked about covering World War II, including the Battle of the Bulge.

“And I covered that from start to finish, almost getting captured once, getting bombed another time, but nothing compared to what the GIs were suffering,” Shelley said in 2004. “And I don’t even dare to talk about that when I think of the experiences they went through.”

Shelley was on the USS Missouri when the armistice was signed, ending the war in the Pacific, which Shelley has called a “one in a million” opportunity to cover history in the making. He was the first broadcaster to interview the crews who dropped the atomic bombs.

“That experience with Colonel Tibbets was probably the most important single news opportunity I ever had,” Shelley said. 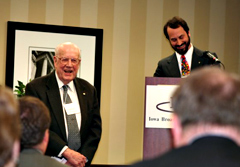 Shelley was on the Iowa State University faculty, from 1965 to 1982. “I can’t tell you how much fun it was to work with a group of people who were proud of what they were doing, who were good and collegial fellows and with students who made you proud,” Shelley said during his speech at the IBNA convention in 2004.

“There are a good many of you right here tonight and I want to tell you you made this old guy happy, whether he made you happy or not.”

Shelley was a founder of the national Radio and Television News Directors Association and an ardent booster of the Iowa Broadcast News Association.  Shelley concluded his 2004 speech by urging broadcast journalists to be active in those kind of professional organizations. “And as members, we say to the public: ‘I’m proud to be a member of this honorable profession.  You can trust me and I’m not going to let you down.’ Whether America realizes it or not, our country is going to depend, eventually, on good, honest objective journalism,” Shelley told that room of broadcasters in 2004.  “That’s your job and ours, still. Let’s do it.”

The national association Shelley helped found issued a statement, saying Shelley was “one of the most notable radio broadcasters of all time” and crediting him with helping to form “an entire industry.”

Bob Priddy has twice served as chairman of the Radio and Television News Directors Association. “Jack Shelley was a giant in the broadcast journalism industry, not just in Iowa but throughout the whole country,” Priddy says. “He was respected by people who knew anything about the history of broadcast journalism at all and his contribution to it, which was enormous on so many different levels.”

Priddy, who is news director of  The Missourinet, says Shelley was a unique man.  “Jack was always somebody who was comfortable with who he was and never tried to impress anybody with what he had been. He was a man who enjoyed a hearty laugh and his laugh will stay with me the rest of my life,” Priddy says. “That’s one of the things I most remember about Jack was how much he enjoyed life, how much he enjoyed being with other people and how much he loved the broadcast journalism profession.”

Shelley was one of the 65 news editors who gathered in Cleveland, Ohio in 1948 to found the organization which is now known as the Radio Television Digital News Association. Shelley served as the group’s president in 1950. “His legacy, his record is there for all to see, but if you didn’t know Jack in person, you really missed someone very, very special,” Priddy says.  “…He an example that I think all of us should strive to be when it comes to being a journalist: fair, honest, direct and a man who stood for the best we can be as professional journalists.”

See photos of Jack Shelley below courtesy of the IBNA.