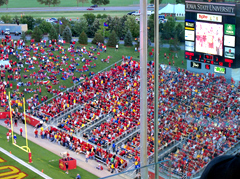 The Iowa State Cyclones host the UNI Panthers in Jack Trice Stadium. The Cyclones are 1-2 after a loss to Kansas state and with games coming up against Utah, Oklahoma and Texas they badly need a win.

Coach Paul Rhoads says they need to come out of the weekend at 2-2 and U.N.I. needs to come out 2-1, so there is a wall in front of them and the entire team knows it is an important football game.

The I.S.U. defense has had trouble stopping the run and the Panthers will provide another challenge. He says they have done well with the option and with the success that K-State had in the option game, they know they will see it. Rhoads says the Panthers can also pass the ball.

Rhoads says the Panthers always have a mental edge in this game as they have nothing to lose, they are not expected to win and come in playing loose. U.N.I. coach Mark Farley says being the third game of the season means this game has a different feel for his players. He says the purpose is to make the team better and do what they have to do to be successful. He says that’s different than when it is the first game of the season. He says there’s also not the sense of needing to get a win over a team in a higher division.

Farley says the first game of the year has an element of surprise, but by the third game the element of surprise is limited to one or two plays. He says most of the Panthers are from the state, and lining up against another in-state team makes it exciting.

U.N.I. beat the Cyclones in their last visit to Ames in 2007 but Farley says this is a much better Iowa State team. Farley says the note to make about Iowa State is that coach Rhoads has changed the attitude of the team and that makes them a challenge.