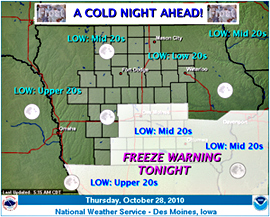 John Hinsberger, a meteorologist with the National Weather Service, says a Freeze Warning is posted for more than two dozen counties across south-central and southeast Iowa.

Temperatures in the warning area will drop into the mid to upper 20s, while northern Iowa can expect temps in the low 20s.

The hard freeze in southern Iowa tonight will bring an end to the growing season – which occurred last night in other parts of the state.

“We’ve already had freeze warnings or frost advisories for the rest of the state, so I think that’s pretty much going to cover the entire state. We shouldn’t have to issue freeze warnings again,” Hinsberger said. The freezing temperatures follow two days of high winds that downed power lines and knocked over semitrailers on Iowa interstates.

Hinsberger says much more comfortable conditions are in the forecast for the weekend. “Tomorrow and Saturday, we should warm up into the 60s in parts of Iowa and mid to upper 50s in the north,” Hinsberger said. There’s a slight chance for showers on Sunday with highs in the 50s.