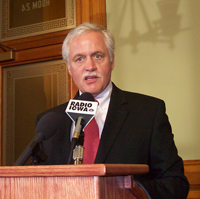 The Republican leader in the Iowa Senate predicts Democrats will feel pressured to embrace a Republican plan to cut “hundreds of millions of dollars” from the current year’s state budget.

Senate Republican Leader Paul McKinley says the pressure on Democrats comes from the results of last week’s election.  “I think we will see a new willingness on their part and, if not, they do so at their own jeopardy,” McKinley says.

Twenty-two of the Republicans who’ll be serving in the state senate in January met today and reelected McKinley as the Republican leader in the state senate. “One of the things we did with all of our members, the new members was to say, ‘What is the message that the voters sent you to Des Moines with?'” McKinley told reporters late Monday afternoon. “Without fail it was, ‘cut the spending. We’re spending too much.'”

Republicans will hold a 60 to 40 seat advantage in the Iowa House in January.  A couple of state senate races remain a bit too close to call, but it appears Democrats will hold a narrow 26 to 24 seat advantage in the Senate.  McKinley said with a Republican-led House and Republican Terry Branstad taking over as governor, it will “absolutely” be difficult for conservative Democrats in the senate to block action on budget cuts.

“I can tell you very clearly that many of these senators who have talked one way back home, saying, ‘We are fiscal conservatives; we don’t like all this spending,’ now they’re going to have a true opportunity to put a vote up on the board where it really counts,” McKinley said at the news conference.

There will be a special election at some point to fill the Senate seat currently held by Republican Kim Reynolds, the woman who was Terry Branstad’s running mate and who will be sworn in as lieutenant governor on January 14, and McKinley says he’s “confident” a Republican will win that seat.