You are here: Home / Military / Iowan receives the Medal of Honor from President Obama 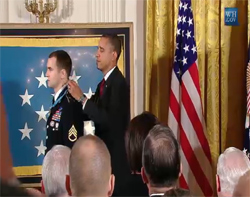 A Hiawatha native received the nation’s highest military honor today at a White House ceremony in front of his family and fellow soldiers. The ceremony started with formalities, but President Barack Obama immediately took time to make a personal observation about Sal Giunta.

Obama said he wanted to go off-script, then added: “I really like this guy,” which led to applause from the guests. “We all just get a sense of people and who they are, and when you meet Sal and you meet his family, you are just absolutely convinced that this is what America is all about, and it just makes you proud,” Obama said.

Obama recognized Giunta’s father, Steve, and his mother, Rosemary, where there in the audience with the couple’s other two children and Giunta’s wife, Jenny. Obama said it was his mother who taught Giunta as a young boy in small town Iowa how to remove his screen from his bedroom window in case there was a fire.

“What she didn’t know was that by teaching Sal how to jump from his bedroom and sneaking off in the dead of night, she was unleashing a future paratrooper who would one day fight in the rugged mountains of Afghanistan, 7,000 miles away,” Obama said.

Obama recounted Giunta’s actions in Afghanistan as he saved two fellow soldiers after his unit was ambushed on October 25, 2007.

“It had been as intense and violent a firefight as any soldier will experience,” Obama said. “By the time it was finished, every member of first platoon had shrapnel or a bullet hole in their gear. Five were wounded and two gave their lives.” Obama said Giunta has tried to downplay his actions. 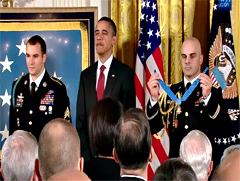 Staff Sergeant Sal Guinta and President Obama during the Medal of Honor ceremony.

“He is a low-key guy, a humble guy and he doesn’t seek the limelight and he’ll tell you that he didn’t do anything special, that he was just doing his job, and that any of his brothers in the unit would do the same thing, in fact, he just lived up to what his team leader had instructed him to do years before: you do everything you can,” Obama said.

But Obama told Giunta that while he may believe he doesn’t deserve the award, it was his fellow soldiers who nominated him for the honor and his commander specifically said in his recommendation that Giunta lived up to the standards of Audi Murphy, the most decorated soldier of World War II.

Obama fastened the blue ribbon and Medal of Honor award around Giunta’s neck after a formal reading of the award citation.

Listen to Dar Danielson’s report on the ceremony: Medal of Honor report 1:37 MP3

Watch the ceremony, courtesy of C-SPAN.