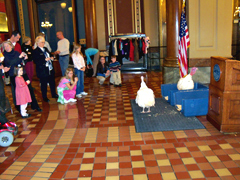 Turkeys Giblet, and Feathers await their pardon from the governor.

A male turkey named Giblet and a female named Feathers were turned loose inside the state capitol building as freezing rain forced the pardoning ceremony indoors. It’s an annual event the Culver and other Iowa governors have held for years.

Culver said it might be the first time the pardoning has been held indoors. He then read the proclamation releasing the turkeys. “I Chester J. Culver, the governor of the great state of Iowa, do hereby pardon our two turkeys that are with us, Feathers and Giblet, today,” Culver read.

The turkeys were well behaved, and walked around close to their cages in the capitol rotunda before and during the ceremony. They also refused to gobble for the Radio Iowa microphone. Grower Cody Simonsen of Aurelia in western Iowa says they didn’t have any special training for the event. 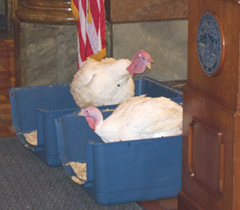 Simonsen raises 150,000 turkeys annually in an operation with his brother. He says turkey production has been great for them, with the high grain prices having some impact on costs, but otherwise he says they are “doing great.”

You are more likely to find one of Simonsen’s turkeys in a sandwich than in a traditional Thanksgiving day meal. He says the majority of their turkeys get processed into lunch meat for the Jimmy Johns fast food restaurants.

It’s estimated Iowa will produce 10.5 million turkeys this year — 9th in the nation.