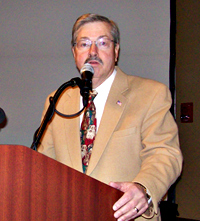 Governor-elect Terry Branstad wants new limits on the way property taxes are calculated not only for commercial property in Iowa, but for farmland and for homes, too.

“I want to not only reduce the commercial property taxes, but I I want to protect the homeowners and the farmers as well,” Branstad says.

Branstad outlined his tax proposals, including his campaign promise to reduce commercial property taxes, during a speech this morning at the Iowa Taxpayers Association annual meeting.  (ITAspeech runs 27 minutes)

Branstad also wants to limit the increase in property tax assessments on farmland, as the value of residential property in Iowa is linked to farmland values. “Because of the productivity formula…it’s a five-year rolling average looking at commodity prices — well, anybody that’s watched what commodity prices are today knows that we’re going to see an increase in those farmland taxes because of the five-year rolling average,” Branstad told reporters after the speech. “Right now they’re limited to going up only four percent a year and I think that should be less. I guess I’d say two percent.”

Branstad said without that change, local governments may see a “windfall” in property taxes.  During his previous tenure as governor, Branstad supported a freeze on local property taxes, but he’s not calling for that as he prepares to start a fifth term.  “We want to make this adjustment in a fair way,” Branstad said.

Branstad is asking local governments to limit their use of incentives — like “abatement” programs which lure businesses to build in a certain area because property taxes won’t be collected for five years, while a competitor in an existing building is paying commercial property taxes equal to 100 percent of the value of that property.

“That’s a disparity we’d like to correct by saying to local governments, ‘Be careful. You can use abatements if it’s a really important project that you think is critical to your community,” Branstad said, “‘But let’s use it sparingly.'” Branstad says.