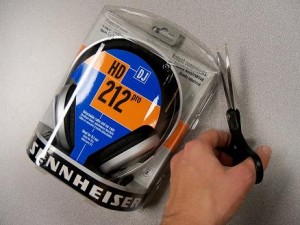 The thick plastic packaging that protects many of the products Iowans will find under their trees this week may pose something of a health hazard. A poll finds 17-percent of adults were injured or knew someone who was hurt while opening gifts during past seasons. Pam Hoogerwerf, injury prevention coordinator at the University of Iowa Children’s Hospital, says clear, heat-sealed plastic is tough to crack open and it’s easy to get sliced.

“It isn’t a surprise because that’s something we see, not just related to children but also to adults coming in with deeper sort of cuts that require some sort of care versus just putting a bandaid on it.” Some are referring to the phenomena of getting frustrated with trying to open factory-sealed plastic packages as “wrap rage.”

Hoogerwerf says parents, dads especially, need to resist the urge to whip out a pocketknife and hand it to their young child.

“Whether you’re sitting around opening Christmas presents or a package that’s arrived another time of the year, but especially at Christmas because kids really want to get into those things,” she says. “Often, parents pass that sharp knife along to a kid who’s not able yet, mature enough to handle that and try to get into a box.”

One report claims Census Bureau data shows people suffer twice the number of injuries from packaging than from skateboards or swimming pools. Hoogerwerf says today’s packaging forces consumers to fight to get at what’s inside, but she says the battle is likely best fought by parents, not children, who could be seriously hurt.

“Pass the package off to the parent,” she says. “If it is going to require a sharp object like a knife to get into the package, adults certainly have the most experience with sharp objects so turn that responsibility over to them.”

Much like the toys the packaging may contain, Hoogerwerf says key elements are age-appropriateness and supervision. She suggest before trying to slice into that plastic package, clear a little space.

“Especially if a parent does take over opening a package for a kid or multiple kids, they’re excited to see what’s in the box and they’re going to hover around,” she says. “It’s probably better to put them at a safe distance, especially if you’re using a knife, to get into a package.”

To avoid a trip to the emergency room, she also suggests: cutting away from your body while using a knife, using blunt-tipped scissors and consider wearing protective gloves. Also, don’t cradle the product in your legs as you try to cut into it — or you could end up jabbing yourself in the thigh.