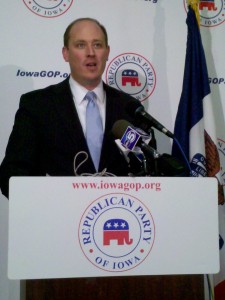 Republican Party of Iowa Chairman Matt Strawn has a plan to discourage Republican presidential candidates from skipping the Iowa Straw Poll next summer. He’s promising to make it an event that “candidates want to attend because there’s the opportunity to address persuadable Iowa Republicans who will be caucus goers in February (2012).”

The straw poll is scheduled for August 13 at Iowa State University in Ames. A couple of 2008 presidential candidates, John McCain and Rudy Giuliani, skipped the last straw poll held in 2007.

Strawn believes GOP presidential hopefuls would be making a big mistake if they didn’t attend the event next year. “If I was running a campaign for president I would much rather find out what my deficiencies are in August, as opposed to December, going into caucus season,” Strawn said. “So, I think it provides a really great role for those campaigns and from the party perspective, it’s an incredible organizational tool for us. It give us a chance to get activists engaged and involved all around the state in the off year. It’s really a win-win, not just for Iowa Republicans, but for those presidential campaigns that need to show some strength to the national media.”

Strawn recently announced that the Iowa Republican Party is expanding the straw poll to a include a debate among the Republican presidential candidates on August 11. FOX News has agreed to host and televise the debate.

Strawn announced earlier this month that he’s seeking a second term as chair of the Iowa Republican Party. He’s hoping to rally the county organizations behind a single candidate for the White House. Strawn plans to open statewide offices in the counties shortly after the caucuses in 2012. “We’re going to be up against Barack Obama and a well oiled machine. Iowans are no stranger to Barack Obama and his political organization,” Strawn said.

If he is reelected by the state Republican Central Committee on January 8, Strawn would become the first chairman in 8 years to hold the position longer than one two-year term.