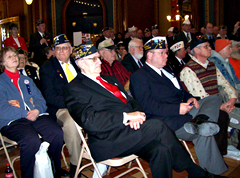 Hundreds of veterans are at the statehouse today, asking legislators to give priority to military-related issues. The chairmen of the House and Senate Veterans Affairs Committees say legislation that exempts active duty military pay from state income taxes already is on their priority list.

“The situation that we have going on is that people on active duty will be serving in another state, obviously. They’ll change their residency to a state that has no income tax and then we never see them again,” Chambers says. “There’s no incentive to come back, so we want those people to come back to Iowa.”

Governor Branstad has promised to sign such a bill into law. Branstad spoke this morning (Wednesday) during a statehouse ceremony to honor veterans. “I want to, on behalf of the State of Iowa, say thank you to all of you that accepted the call of duty to serve this state and this nation and for the sacrifices that you and your families have made and that others continue to make to defend freedom,” Branstad said.

Representative Chambers, who is a member of the Iowa Air National Guard, was deployed to Kyrgyzstan in 2009. He spoke to the crowd of veterans, too. “I do want to say a special thank you — send out a special ‘shout out’ if you will — to those members of our Army National Guard, Air National Guard who are currently serving and their families because of the great sacrifice and dedication and hard work that they do,” Chambers said. “…We need to keep them all in our prayers and in our hearts.” Five veterans service organizations are co-sponsoring today’s “Veterans Day at the Capitol.”

The groups are lobbying to exempt the pay military retirees receive from state income taxes, too.