Fifteen people dressed in funeral garb have been slowly circling the rotunda area today, right outside the Iowa House and Senate, to demonstrate what they say is the “death” of democracy. Mary Beth Gardam of Clive is wearing black clothes — and a black veil.

“I’m hoping that legislators will limit the amount of money that corporations can contribute to elections,” Gardam says. Gardam and the others in the procession are critical of lat year’s U.S. Supreme Court ruling which declared corporations have some of the same free speech rights as individuals when it comes to federal elections.

Gardam and the others in her group are asking state legislators to pass laws that would impose new limits on corporate spending in elections. 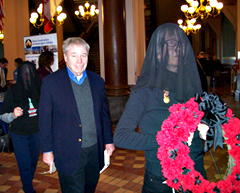