You are here: Home / Fires/Accidents/Disasters / Travel tough for planes and automobiles 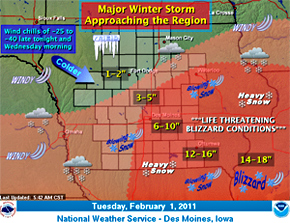 Update 2:25: the Iowa State Patrol is recommending against any travel in central Iowa.

State transportation officials are warning Iowa drivers of blowing and drifting snow and white-out conditions as a severe winter storm moves through the state today.

Meanwhile, Iowa’s major airports are expecting flight disruptions over the next two days.

D.O.T. spokesperson, Dena Gray-Fisher says accidents involving several semis and a few other vehicles have already been reported, and things are not going to get better.

“The roadways are definitely not gonna improve — we’re looking at some very high winds,” Gray-fisher says, “in the northwest were looking at gusts maybe into 35-miles an hour, until you get down to the southeast, we’re looking at 50-mile-an-hour winds. That’ll be extremely difficult to see, drifting of snow.”

Air travel out of the state is expected to be impacted into tomorrow. At the Quad Cities airport, operations director, Bryan Johnson, says while flights are coming and going as usual now, he expects disruptions over the next day or so. He says right now things are in normal operations as the snowfall thus far has not hampered arrivals and departures. United has canceled all flights tomorrow between the Quad Cities and Chicago. Johnson predicts more cancellations from other airlines.

In Des Moines, airport spokesman Roy Chriss says he’s already aware of several cancellations and delays, and expecting more Wednesday as the region’s major hubs get heavy snow. “As this thing moves further to the north and east, we’re gonna see some real problems with Chicago, Detroit, probably even Memphis, because it will be between us and Memphis, it probably will impact Milwaukee.”

Chriss says leaving Iowa won’t be a problem, but you could find trouble at your next stop. “Probably you can get out of here, but when you get to some of those major hubs –Chicago, Detroit, Minneapolis — you may have problems getting out of there,” Chriss says, “because those tend to back up because they have greater flight times and usage.”

Chriss says passengers who can adjust their flight plans should, and he says several airlines aren’t charging their normal rescheduling fees because of the storm. The Iowa Department of Transportation says the storm is causing problems across the country — and if your plans include travel to Arkansas, Illinois, Kansas, Missouri or Oklahoma — be aware that a state of emergency has been declared in these states.

See the latest weather warnings and conditions at: www.weather.gov.