The Iowa National Guard says three soldiers from a unit in Dubuque were injured in Afghanistan by an “Improvised Explosive Device.”

Guard spokesman, Colonel Greg Hapgood, says the soldiers were injured Monday. Hapgood says at approximately 11:45 A.M. local time, the soldiers with Company A of the First Battalion, 133rd Infantry, were injured when their uparmored vehicle was attacked during a patrol in the Laghman Province.

The soldiers injured are 23-year-old Specialist Adam Eilers of Garber, 20-year-old Specialist Andrew Zimmerman of Camanche and 22-year-old Private First Class Caleb Redell of Erie, Illinois. Hapgood says he doesn’t have an update condition report on the three. He says they are receiving medical at Bagram Air Base for their injuries and will be evaluated for possible evacuation for further treatment depending on the extent of their injuries. 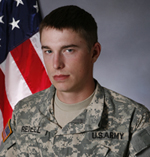 Hapgood says the Iowa soldiers where in a vehicle designed to protect them for such attacks. Hapgood says they were in a “mine resistant ambush protected all terrain vehicle” or MATV, the newest most sophisticated armored vehicle used by infantry units in the Army. He says the equipment made a difference in their surviving the attack.

Photos courtesy of the Iowa National Guard.  A photo of Andrew Zimmerman was not available.