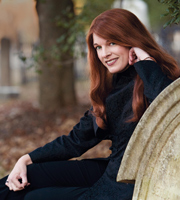 The best-selling author who created the popular “Hollows” series about a woman who experiments with black magic is making her first visit to Iowa next week. The novel “Pale Demon” is the ninth book in the series that’s especially popular with women between the ages of 25 and 45.

In an interview with Radio Iowa from her home in Michigan, Kim Harrison says she created the outlandish mix of characters, centered around Rachel Morgan. “She’s a 20-something witch living in modern-day Cincinnati and she lives in a church with a vampire and a pixie, solving paranormal crimes, trying to make rent and get a solid boyfriend,” Harrison says.

In this tale, Morgan is facing a potential death sentence so she and her supernatural roommates make a cross-country road trip. “She finds herself in the precarious position of being shunned by her witchkind and the only way to get that taken care of is to travel out to the West Coast for the witches’ annual business meeting,” Harrison says. “She she packs up her stuff and off she goes,” taking the vampire and the pixie along for the adventure.

Harrison says she read a lot of fairy tales in her younger years and enjoys creating her own yarns that meld urban fantasy with popular culture. “The beginnings of the Rachel Morgan story started with me trying to put the most oddball characters I could think of, a vampire, a pixie and a witch, put them in a bar and see what happens and still try to keep Rachel the girl next door, with the same charm and the same issues and the same problems,” Harrison says.

“It’s worked out wonderfully.” The Hollows series of books have sold more than two-and-a-half million copies. While her main character is a witch who “dabbles” in black magic, Harrison says she’s not a witch herself, not even close. “I’m asked that quite a lot and I always say I do not practice Wiccan,” Harrison says. “To be quite honest, it scares me. I don’t even do much research on the magic. I just make it up as I go based on common stuff that anyone might hear in the movies and in fairy tales.”

Still, she gets a lot of mail from people who do practice Wiccan and she says they appreciate the way Rachel Morgan is portrayed. Like her main character, Harrison is on a road trip of her own and will stop at the Des Moines Public Library’s eastside branch next week. She’s scheduled for a book signing and reading at 6:30 P.M. on Monday, March 1st.