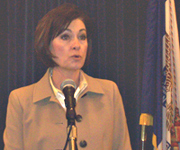 Lieutenant Governor Kim Reynolds went on a trip to  Taiwan several years ago, as part of a delegation of young American elected officials.

“So this would be a return trip to for me. At that point, so I hadn’t been east of the Mississippi, so I can tell you that that was quite an experience for a gal from Osceola, newly-elected to the county treasurer’s office, but it was a phenomenal experience,” Reynolds says. “We landed the day of the national election.”

Iowa Secretary of Agriculture Bill Northey will be along on both trips. Northey says there’s the potential for huge export growth in the region. “It is a real challenge to figure out how to look at success and certainly success has been the amount of exports that we have sent to Asia right now,” Northey says. “But those were built on decades of building relationships to be able to get to the point where they’re willing to buy and trust American exports.”

Debi Durham, the director of the Iowa Department of Economic Development, says “elevating” international trade is the right job-creation strategy for the state of Iowa. “Ninety-five percent of the world’s consumers live outside of the U.S., along with 70 percent of the world’s purchasing power,” Durham says. “Plus, many of these countries have the fastest-growing economies.”

The governor’s trip to China and South Korea is set for June 6th through the 17th. Experts believe U.S. pork exports to the region could grow significantly, especially once a pending U.S. trade agreement with South Korea is ratified.