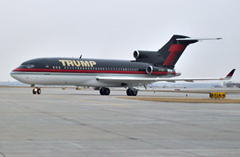 One of Donald Trump’s aides is in Iowa today meeting with Iowa Republicans to gauge interest in the idea of a Trump campaign for the White House.

Michael Cohen, executive vice president and special counsel to Trump, is co-creator of the website ShouldTrumpRun.com and he insists Trump was not involved in the planning of today’s trip.

“Big milestone, we just hit 500,000-plus people on the website. We are very excited,” Cohen told reporters in Des Moines this morning. “We do understand that Iowa is the first stop if anyone is interested in the presidential election. Certainly, along with the other half million individuals, we are very anxious to learn about Iowa and be able to report back to Mr. Trump when he hopefully decides to run in June.”

Cohen flew to Iowa in one of the two jets Trump owns — the smaller one. “I took a personal day today so my hope is that when I ultimately finish this I can go back and I can gauge the feeling that I have from Iowa and for Mr. Trump,” Cohen told reporters, who asked if Cohen had had any conversation with Trump about the trip.

“I see him every single day. My office is on his floor, so I certainly do have contact with him, but right now this is, again, for ShouldTrumpRun.com.”

“I mean, Mr. Trump is one of the wealthiest men in the country. He’s also one of the most well-known individuals on the planet,” Cohen said. “He’s made a tremendous fortune for himself and what would be fabulous is to see him put that ability and his talents to work for the rest of us.”

Trump, a real estate developer who is the star of a reality show on network television, has been a target of comedians like David Letterman, who once joked he knew Trump was serious about running for president because he “threw his hair in the ring.”

Trump’s vice president bristles at the suggestion Trump is unelectable because he’s been the butt of those kind of jokes. 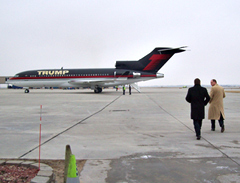 “As is President Obama, as well as Mike Huckabee, Ron Paul, Pawlenty, Sarah Palin — I believe they’ve all been made fun of,” Cohen said. “That’s what the press does. They like to have fun with anyone and everyone.”

In addition to connecting with Iowa Republicans, Cohen will meet with two of the people in Newton who got business advice from Trump after Trump saw a “60 Minutes” profile of the city’s economic woes. Cohen also plans to attend tonight’s event at a church in Waukee where five potential presidential candidates are scheduled to speak.