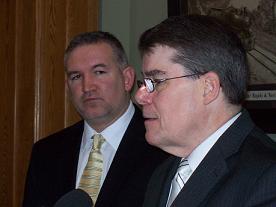 Iowa Democrats say recent events in Wisconsin have inspired them to “dig in” against a labor bill that’s been debated for the past two days in the Iowa House. Republican lawmakers in Wisconsin have just passed a bill that virtually eliminates collective bargaining rights for public workers in that state.

Kevin McCarthy is the Democratic Leader in the Iowa House. “It’s got us more motivated and more dug in because it shows the length that these new Republican majorities around the country will go to target and hurt their political opponents,” McCarthy says, “which I think is one of the primary motivations behind the bill.”

House Republican Leader Linda Upmeyer of Garner says what Iowa Republicans have proposed isn’t the same as what will soon be law Wisconsin. “Their bill is much broader than ours. It does a lot more things than ours,” Upmeyer says, “so I really don’t think it’s factored in a great deal in our decisions about this bill.”

House Speaker Kraig Paulsen of Hiawatha says he and his fellow Republicans are simply fulfilling their campaign promises. “It’s one of the things that we said we’d do is address the costs of government,” Paulsen says, “and in this case, in particular, it’s the costs of employee expenses.”

McCarthy says he and his fellow Democrats are standing on principle, too. “If you’re going to do that sort of debate, we (Democrats) aren’t just going to roll over and take it,” McCarthy says. “We’re going to stand up and fight and if you’re not going to be focusing on jobs and bread and butter issues that we think the House should be focused on, then we’re going to have our voices heard very, very loudly for those people who will be hurt by this legislation.”

The bill Republicans have proposed would no longer allow public employees in Iowa to negotiate over health care benefits or layoff plans. The House Democratic Leader says that steers into “stormy” waters.”We believe it takes away rights from police officers and fire fighters and teachers and corrections workers and troopers — hard-fought rights that took decades to obtain,” McCarthy says. “…We’re going to fight to protect those rights. We think that people do have a right to bargain in good faith at the negotiating table.”

Republicans like Paulsen want to let individual workers negotiate their own salary and benefit packages, a move Democrats charge essentially guts the concept of bargaining as a group. Paulsen has a counter argument.

“That’s one of the things that the unions have repeatedly told us is that they are tired of having to represent people who are not members of the union, or pay any types of dues,” Paulsen says. “This goes exactly to that point.  It would no longer require them to do that.”

Unions have pushed so-called “fair share” legislation in years past that would have required non-union members to pay a fee to the union for contract negotiations and any other services the union might provide in the workplace.

The Iowa House opened debate on the labor bill Wednesday afternoon, but suspended debate shortly after 10:30 Wednesday night.  The House resumed action on the legislation shortly after seven o’clock this morning.  Democrats have drafted more than 100 amendments to make changes in the bill.  So far today, the House has voted on 20 amendments, but action abrupted stopped at 6:47 p.m. this evening when legislators went into closed-door meetings.