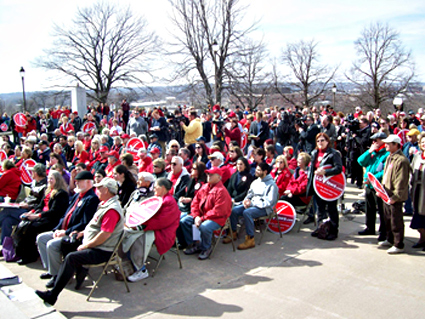 Hundreds of people gathered for a rally at the state capitol supporting traditional marriage.

Hundreds of people chanting “Let us vote!” gathered on the steps of the statehouse today, denouncing the Democratic leader of the state senate who is blocking a resolution that would set up a statewide vote on gay marriage. 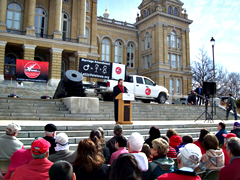 Bob Vander Plaats, president and C.E.O. of The Family Leader, warned the crowd the culture war isn’t for the faint of heart. “We don’t believe this is a 60-day battle or a six-month battle or a six-year battle,” Vander Plaats said. “We are in this fight for the long-term and we are not going away.”

Rally organizers invited the former chief justice of the Alabama Supreme Court who gained national attention in 2003 when he refused to remove a monument of the 10 Commandments from the Alabama courthouse. Roy Moore was in Iowa last fall, too, campaigning against the three Iowa Supreme Court justices on the November ballot who joined the unanimous ruling that paved the way for gay marriage in Iowa.

“We see the things that are happening in Japan and across the nation, but right here we’ve got a moral meltdown,” Moore said at today’s rally. 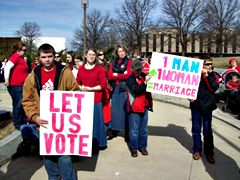 Signs from marriage rally at the state capitol.

Reverend Keith Ratliff, pastor of the Maple Street Missionary Baptist Church in Des Moines, urged the crowd to lobby state senators after the rally. “For this is not a playground, my brothers and my sisters, this is a battleground,” Ratliff said. “To our legislators: let us vote.”

According to Rafliff, the rights blacks fought for during the civil rights movement should not be extended for the “deviant behavior” of homosexuality.  Troy Price of “One Iowa” says calling gays and lesbians “deviant” is telling. “It’s hard for them to preach a message of love while they’re saying words of hate,” Price says.

According to Price, Gronstal reflects the “fairminded” attitudes of Iowans. “He has been a strong champion of the cause of gay and lesbian rights in this state,” Price says, “and we will be standing shoulder-to-shoulder with him through his reelection efforts.”

Gronstal’s current four-year term in the senate expires in 2012 and conservative groups, including “Tea Party” activists, have said they intend to campaign against Gronstal’s bid for reelection next year.

Earlier this year, the Republican-led Iowa House has passed a resolution that calls for a statewide vote on a constitutional amendment which would ban gay marriage in Iowa. Gronstal, using his authority as Senate Majority Leader, does not intend to allow a senate vote on the issue.