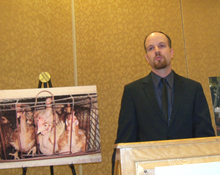 Matt Rice of Mercy for Animals speaks at a news conference in Des Moines.

The Iowa House has approved a bill that calls for prison sentences of up to 10 years for people caught going into a livestock confinement to take pictures or video of the animals and those who’re caring for the livestock.

Groups like People for the Ethical Treatment of Animals, or PETA, have released videos taken from inside livestock confinements to illustrate their contention that animals are being abused, but Representative Annette Sweeney, a Republican who raises row crops and cattle on her farm near Alden, says many of these video “stings” have been a disservice to “bona fide” farmers.

Representative Muhlbauer, a Democrat from Manilla, says it’s about biosecurity, too, because people sneaking around livestock confinement may be carrying in dangerous diseases that will kill the animals. “If you think your meat prices are high right now, let everybody start walking around these facilities and destroying two-thirds or better of our hog production, and our meat (prices) will go skyrocketing,” Muhlbauer says.

The bill passed the House on a 66 to 27 vote. Representative Pat Murphy, a Democrat from Dubuque, opposed the bill. “The overwhelming majority of farmers and people that own breeding facilities and all that here in Iowa operate very reputable businesses and treat their animals well. That’s how they make their money,” Murphy says.

“But for that small percentage that has a problem with it, you’ve got to wonder what they want to hide.” The House Ag Committee has already approved the bill, so the next stop for the legislation is the full, 50-member senate.

The animal rights group Mercy for Animals held a news conference today in Des Moines where they denounced the bill. M-F-A spokesman, Matt Rice says if either of the bills in the Iowa House and Senate became law, it would be the first of its kind in the country.

Rice says Iowa currently has some of the weakest animal cruelty laws in the entire nation. “Legislation should focus on strengthening animal cruelty laws, not prosecuting those who blow the whistle on animal abuse,” Rice says, “If producers truly cared about animal welfare, they would offer incentives to whistleblowers, install cameras at these facilities to expose and prevent animal abuse, and they would work to strengthen animal abuse laws to prevent animals from needless suffering.”

The news conference came just a short time after the bill passed the Iowa House, and Rice said he hopes it won’t gain approval in the Senate. “Concerned citizens who care about free speech, freedom of the press, consumer health, public safety, and of course animal welfare, are encouraged to contact their representatives and ask them to oppose this absurd legislation. If these bills were to pass, it would set dangerous precedent allowing factory farms to operate in the shadows with impunity while threatening public health and animal welfare,” Rice said.

Rice says his group does not break any laws in conducting undercover investigations, and says those investigations have led to criminal animal abuse prosecution of workers and reform of corporate animal welfare policies.