The Iowa National Guard has confirmed the 185th Air Refueling Wing in Sioux City has deployed a small group of airmen and aircraft to support the no-fly zone over Libya.

The Sioux City wing flies the KC-135 Stratotanker, and those planes flew out of Iowa on March 26 to join other Air National Guard units from several states. The units are conducting refueling operations from an undisclosed location outside of Africa as a part of Operation Unified Protector.

Update 1pm: In and interview with Radio Iowa, Iowa National Guard spokesman, Colonel Greg Hapgood, says a small number of airmen and aircraft from the 185th Air Refueling Wing in Sioux City are on the way to support Operation Unified Protector, which is the NATO mission in Libya. 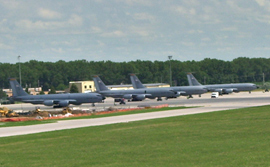 Hapgood says they don’t have a timeline at this point for how long the mission will last. Hapgood says the Iowans are based at a remote location, not in Libya and not in Africa, where they can provide support to NATO aircraft.

The Sioux City unit was converted from fight jets to refueling tankers in 2000, and Hapgood says they have been busy since that time.

Hapgood says it is “absolutely critical to have maintenance and refueling capabilities” for this type of no-fly zone mission. The planes flew out of Iowa on March 26 to join other Air National Guard units from several states.