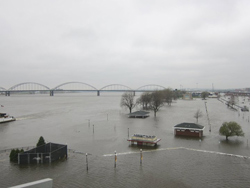 The forecast for the rising Mississippi River could lead to the sixth worst flood in the history of the Quad Cities. Flood stage is 15 feet.

National Weather Service hydrologist Maren Stoflet says the latest prediction has the Mississippi River cresting in the Quad Cities at 21 feet on Friday, about a foot above where it is now. “That’s what we consider to be in the category of major flooding,” Stoflet said.

“The crests we’ll be seeing, and even some of the current levels, fall within the top 10 historical crests for much of the Mississippi River along the Iowa/Illinois border.” The forecasted crest on Friday in Muscatine is 22 feet. 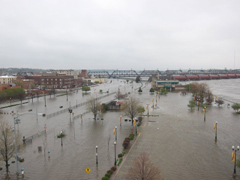 Stoflet expects the flooding to linger for weeks to come. “This time of year can be pretty active as far as showers and thunderstorms…any significant rain from that could cause additional rises here through the spring,” Stoflet said. “So, beyond the snow melt doesn’t mean we’re in the clear yet. We’ll have to keep an eye on the precipitation forecast through the spring.”

Flooding has already closed many bridges and roads around downtown Davenport.