You are here: Home / Human Interest / Czech and Slovak Museum ready to move to higher ground 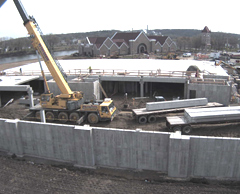 View of new foundation where the Czech and Slovak Museum will move.

Nearly three years after it was swamped by eight feet of floodwater, the National Czech and Slovak Museum in Cedar Rapids is set to begin moving to higher ground.

Museum marketing director, Diana Baculis, says they’ll start by lifting the building off its foundation today. She says the weather the last several days has caused concern as they prepare to make the move.

Baculis says they do still intend to move next Tuesday the 26th, but are keeping an eye on the weather as they’re concerned the rain could cause a problem with the road they’ll use to move the structure.

The building is only moving 480 feet across the street to higher ground, but it has to be a careful move as the building weighs 1,400 tons.

Once the building is lifted up today, it will be set on wheels, and then begin its journey next week to its new foundation. She says it will only take a few days to move the building, over in front of the new foundation which has the parking garage. It will then take another few weeks to slide it into its permanent place on the foundation. Baculis says those who want to see the mega move can do so on their webcam.

Baculis says they have a webcam set up at: www.ncsml.org and see two different views of the move. Eastern Iowa has been hit by rain and snow in the last week and Baculis says they’re hoping for better weather to get the building moved.

“Windy and dry would be perfect for us, but I know we live in Iowa, and Iowa is very, very wet in April,” Baculis says. The new site will put the museum at 11 feet above the flood level of 2008. The move is costing the museum $713,000.