You are here: Home / Human Interest / Wittmack ready for return to Iowa after completing World Triathlon 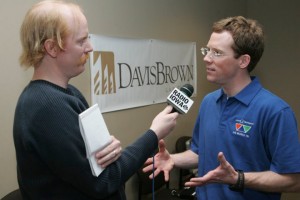 Adventurer Charlie Wittmack is preparing to return to Iowa after recently completing a 10,000 mile journey that began last July. The 34-year-old Des Moines man completed his World Triathlon on Friday when he reached the summit of Mt. Everest.

Wittmack previously reached the world’s highest peak in 2003 after surviving three days without food or water in white-out conditions. His final assent this time was a much different experience. “As I started that night, I was under the stars…more stars than you can ever imagine,” Wittmack said. “As the sun came up, I realized I had captured the perfect day. There was absolutely no wind, blue skies and just absolutely perfect conditions.”

Wittmack reach the peak solo after six days of climbing. Prior to the climb of Mt. Everest, Wittmack ran or hiked 950 miles, rode a bike 9,000 miles from France to Nepal and swam 200 miles from the source of the Thames River and across the English Channel.

He’s now in the Mt. Everest Village of Gorak Shep, located at an elevation of 17,000 feet. “Mentally, I’m doing good. I’m relieved to be back down and to be safe. Physically, I have no frostbite this year. I’ve got a minor respiratory infection that I think will clear up,” Wittmack said. He’s working to help three other Iowans climbing Everest. Matt Boelman of Des Moines, Brian Block of Johnston and Joe Brus – an Indiana resident who graduated from Iowa State University – are hoping to reach the summit on Thursday.

Wittmack’s final mission related to his World Triathlon involves raising money to improve maternal mortality rates in Nepal. He says women are 100 times more likely to die while giving birth in Nepal than they are in the U.S. Wittmack hopes to raise roughly $280,000 over a three year period for Save the Children – a U.S. based nonprofit that works in Nepal.

Wittmack, who is the only American to have climbed Mount Everest and swum the English Channel, is excited about his return to the U.S. “I’m looking forward to the summer, enjoying RAGBRAI, enjoying the Iowa State Fair and maybe taking up the sport of fishing or something a bit more reserved,” Wittmack said. “Mountain climbing is something I might be aging out of here quickly.” Wittmack made his comments Tuesday on the Iowa Public Radio program The Exchange.