You are here: Home / Education / I.S.U. solar car on the road across Iowa 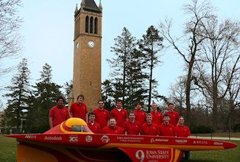 Members of Iowa State University’s solar car team are in the midst of taking their unique, three-wheeled vehicle on a tour of Iowa.

Evan Stumpges, the team leader and a senior in mechanical engineering at I.S.U., says the car is known as Anthelion and they built it all by hand.

They raced the car some 1,100 from Tulsa, Oklahoma to Chicago as part of the recent American Solar Challenge. Team PrISUm also went to the Indianapolis Motor Speedway last week for another solar-car race. It involved ten teams from colleges across the U.S. who raced for three days. I.S.U. placed fourth.

Stumpges says the team is now taking the solar car across Iowa as part of what’s being called The Sun Run Tour. He says the weather is sunny — which is good for driving a solar car — and they’re visiting schools and businesses across Iowa to show off the unusual vehicle.

The Sun Run Tour includes stops in Ames, Huxley, Granger, Oskaloosa, Fairfield, Wayland, Crawfordsville, Winfield, Davenport, Clinton, Iowa City, Oxford, Cedar Falls, Webster City, Sioux City and Algona. Even if it gets cloudy, the car has batteries that’ll carry it about a hundred miles on a full charge. The students are working to design and build a new car for next summer’s cross-country race.