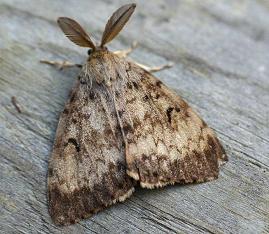 The state of Iowa plans to employ the use of chemical weapons to try and protect our environment from a highly-destructive enemy swarming at the border — the gypsy moth. State entomologist Robin Pruisner says the winged, brown creatures are starting to appear in far northeast Iowa and an action plan is being put into place.

Pruisner says, “We’re never going to be able to eradicate this insect, but what we’re trying to do is lessen the impact of it, initially, so our environment and our trees can get accustomed to it and we can slide into a place where we can learn to live with the insect.”

The moths were brought to the U-S about 150 years ago to help with silk production, originally in the Boston area, but they escaped and have been spreading across the nation ever since.

“The gypsy moth feeds on somewhere between 300 and 500 different plants,” Pruisner says. “It does have a particular love of the oak tree, our state tree, and we are concerned about the health of our oak trees and our forest lands as well as our front yards.”

To battle the insect, she says the state is going to use plastic, blue flakes — about the size of chopped oatmeal — which are embedded with the same scent that’s given off by a female gypsy moth when she’s ready to mate.

“We can apply six ounces of these flakes per acre, that’s a very, very small amount, it doesn’t affect any other animal, any other insect,” Pruisner says. “Now, the male gypsy moth will literally smell the females everywhere and in the confusion, they can’t find a real female moth to mate with.”

This tactic is called “mating disruption treatment” and should help to keep the pest’s population in check, at least temporarily. Airplanes will be used to drop the flakes in four planned applications this year in two counties in northeast Iowa — Allamakee and Jackson.