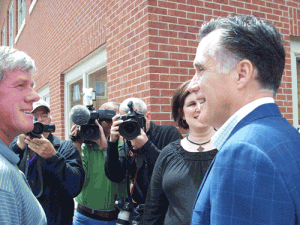 An event featuring a likely Republican presidential candidate ended abruptly early this afternoon when the fire alarms in the State Historical Building in Des Moines went off.

It was the first visit former Massachusetts Governor Mitt Romney has made to Iowa this year. Romney, the runner-up in Iowa’s 2008 Caucuses, is expected to formally enter the race for the GOP’s 2012 presidential nomination. He was the featured speaker at an event over the noon-hour that drew a crowd of over 200.

“Do you really think you can win Iowa given the strength of social conservatives in this state?” the forum’s moderator asked.

Romney pivoted to the crowd: “Can I win Iowa?” he asked, and the crowd applauded. But as the moderator began to ask another question, Romney urged the crowd to exit the State Historical Building as the alarms resumed.

“Discretion is the better part of valor. I think we ought to be very careful and just carefully go on outside and I’ll be happy to get pictures with each of you, shake hands with you if we’ve got some time,” Romney said, as the alarms ramped back up. “And I want to say thank you for being here. Thanks for your help. Let’s win a good one here.”

Romney gave just a few hints as to his Iowa campaign strategy.

“I’ll be here plenty and you’ll get to know what I stand for…Iowa plays a critical role in the process of selecting our nominee and selecting our president. You’re first in the nation and that’s why I’m here,” Romney said.  “Of course, I’m going to visit other states as well and make sure that my message is taken across the nation.”

Romney stressed his private-sector experience and told the crowd his “wheelhouse” is the economy. Romney derided President Obama as an “inexperienced” and “misguided” leader.

As for that fire alarm, there was smoke but no fire. It turns out someone who works in the State Historical Building burned a bag of microwave popcorn. Kim Schmett, a former Republican candidate for congress, was among the crowd of people who exited the building with Romney.

“Out of all the years of campaign experiences and events, I’ve never had to leave because of a fire alarm,” Schmett said.

As Romney walked through the crowd, a woman asked if he supported federal subsidies for ethanol. Romney said he did.  He posed for several photos, then said good-bye to former Governor Robert Ray before he left for a late afternoon picnic in Cedar Rapids.