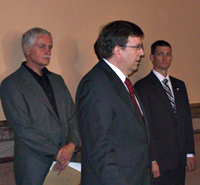 Republicans in the Iowa House expect to pass a massive bill next week that outlines the GOP’s nearly $6 billion state budget plan as well as a proposal to reduce property taxes.

Democrats in the Iowa Senate already have vowed to reject the package, but House Speaker Kraig Paulsen, a Republican from Hiawatha, says it’s time for lawmakers to quit “dinking” around and wrap up the 2011 legislative session.

“We need to do our job and get this figured out,” Paulsen says.

The bill will include a two-percent increase in general state support of K-through-12 schools for the academic year that begins in the fall of 2012. Paulsen says it’s an effort by Republicans to try to meet Democrats’ demands for more state spending on schools.

“I think we have been exceedingly patient with the process,” Paulsen says, “and trying to come to some kind of resolution.”

A key Senate Democrat says that’s a “small step” forward, but Democrats will continue to insist on more state aide to schools for the academic year that starts this fall. The top Republican in the House says that’s now a moot point.

“School districts have already certified their budgets. Clearly they can manage where they’re at. The projection that there’d be massive layoffs did not occur,” Paulsen says. “In fact, I think the average pay raise for a school teacher in Iowa is running at about three percent right now.”

The 2011 Iowa legislative session has run into weeks of overtime as Democrats and Republicans have failed to reach an agreement on key components of the state budget.  Key committees in the Iowa House will consider the massive bill on Monday. The 100-member House is scheduled to debate the plan Tuesday.

“The proposal and the bills that were up on the table already obviously we were not having success with,” Paulsen says. “Well, let’s get another one up there and move it foward.”

House Republicans intend to include a proposal in the package that Democrats and unions staunchly oppose. It would require all state employees to pay at least $100 a month for health insurance. It would immediately apply to all employees of the legislative branch of government, but workers in the executive and judicial branches would not have to pay the hundred bucks monthly until contracts are renegotiated.

“Eighty-four percent of state employees make no contribution to their health care,” Paulsen says. “…I think that’s out of touch with what goes on in the real world.”

An abortion-related issue is included in the package. It would ban the use of taxpayer dollars to pay for abortions in cases of rape, incest or severe deformity of the fetus.  Under current law, low-income women in those circumstances may obtain a taxpayer-financed abortion.  Under the House GOP plan, state tax dollars could only be used to pay for abortions when the mother’s life is endangered by the pregnancy.

The House Republicans’ plan meets Republican Governor Terry Branstad’s demand for a two-year budget, although it’s written in such a way that the allotment for most state agencies is just 85 percent of what’s expected. The House speaker says that means legislators will return next year and make adjustments based on updated information.

Listen to Paulsen & other GOP leaders explain the package: GOPJune2

(This post was updated with more information at 4:25 p.m.)