Governor Terry Branstad swore in the three new justices of the Iowa Supreme Court today in a ceremony in the Iowa House chambers at the state capitol. The new members replace the three judges who were voted out of office in last November’s retention election. Thomas Waterman of Pleasant Valley was the first to be sworn in.

Waterman and the other two new justices had friends, family and colleagues on hand, and used their remarks to thank them. Waterman’s father is dead and during his remarks he spoke directly to his mother.

Waterman told his mom that along with his dad they taught him “the importance of family, friends, of education, of hard work of giving back to the community, of giving back to our professions, taking the high road ethically.” He says his dad reminded him to stay humble as “no one has a monopoly on wisdom” and said he tries to live by their teachings. Waterman is married to his wife Maria and has four daughters, including triplets. Edward Mansfield was born and raised in Massachusetts and eventually came to Iowa to join a Des Moines law firm.

Edward Mansfield is sworn in by Governor Branstad.

Mansfield said he didn’t grow up in Iowa and had to begin by thanking his “Iowa half,” his wife Elizabeth. He says his wife is an Iowa native, his best friend, closest confidant and embodies everything that is good about our state. Mansfield and his wife have three children.

Bruce Zager of Waterloo was the final judge to be sworn in. Zager says it was truly awe inspiring to be in the state capitol to be sworn in and said it was historic to have members of all three branches of government at the ceremony. Zager said he was “honored and humbled” to be nominated to serve on the high court. Zager is married to his wife DiAnn and has three children and three grandchildren.

Chief Justice Mark Cady wrapped up the proceeding. “This has been a very, very good day, not only for our three new justices and their families, but in many other ways as well,” Cady said, “it has been a very good day for the process that Iowa has used to select the very best people to serve on the bench.

The three new justices now make a total of 110 who have served on the Iowa Supreme Court dating back to when Iowa became a territory in 1838. 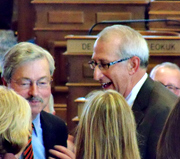 Justice Bruce Zager prepares to put on his robe after being sworn in.