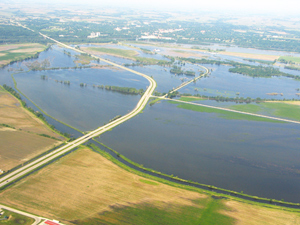 A rainy weather forecast is heightening concerns for western Iowa residents who are preparing for record flooding along the Missouri River.

In the Harrison County town of Missouri Valley, Mayor Clint Sargent says businesses have closed and homeowners in low-lying areas are moving out. Many people in the town of just under 3,000 residents have battled floods before.

“In the flood of 2007, we had hours to prepare,” Sargent said. “Obviously now we’ve got more time, but every hour we have, we’re making sure public safety is insured, we’re protecting critical assets and making sure everyone is moved out to higher ground.”

Sargent requested 250,000 sandbags from Iowa Emergency Management to help protect Missouri Valley’s water treatment plant and sewer lift stations. “There are additional bags we’ve received from other sources. Basically, our goal is to fill as many of those sandbags as possible to secure those assets and then respond to those areas where the water rises that we may not have prepared for.”

Many volunteers who are filling sandbags in Missouri Valley have traveled 30 miles from Omaha/Council Bluffs. “There’s youth baseball teams, church groups, a group from Denison and the Iowa Department of Corrections is involved” Sargent said. “We recently had a major hail storm come through and brought a lot of damage. There’s contractors that were doing work for private residents…they’re sending crews in to help with the sandbagging process. It’s an amazing site that everybody’s coming together to help one another.”

It will soon become a little more difficult to travel to Missouri Valley. The Iowa Department of Transportation plans to close nearly 15 miles of Interstate 29 today or Friday because of the rising Missouri River. No traffic will be allowed on I-29 from just north of Council Bluffs to the interchange with I-680 at Loveland. The timing of the closure will depend on how fast the river rises. The portion of I-680 leading from I-29 to north Omaha is also scheduled to be closed.