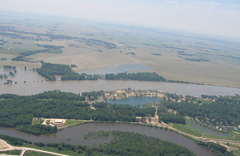 The head of Iowa’s Homeland Security and Emergency Management division says work is underway this morning to repair newly-discovered problems in Missouri River levees, and Derek Hill says it looks to him as if some of the levees haven’t been regularly maintained.

“They haven’t been maintained every day or on a monthly basis, it looks like to me,” Hill said this morning during a news conference at the Iowa statehouse.

According to Hill, a main concern now is the speed of the water and how levees along the Missouri handle that velocity.

“As someone stated last week, we’re starting to move into the vigilant stage,” Hill said, “basically watching and making repairs where necessary, looking for water where we didn’t expect it to be.”

Officials expect the Missouri River level to rise another foot to a foot-and-a-half in some places. The latest estimates indicate 80 homes in Iowa already have been flooded by the river. Utilities have been shut off to up to 800 homes along the river.

“There’s a lot of work that’s being done,” Hill said. “We’ve had some major boils develop dowb in Fremont County over the weekend that they are busily working on, trying to sandbag and plug those. Also up in Mills County we’re delivering about 30,000 pounds of bentonite which is an expansive soil. It’ll expand about eight- or ten-times its volume once it’s wet and they’re filling holes there that animals that have burrowed into the levee have created.”

Officials are concerned about large items which are floating down river, too.

“There was a trailer home floating down the river the other day, that basically got lassooed and got anchored to get it out of the pathway,” Hill said. “Things like this can go down, create trouble with barriers when they bang into them at the speed that they’re traveling and or they can pile, as we all saw in 2008, they can pile up against bridges and tressels and create a damming effect which will raise the water level even higher backstream.”

Listen to Hill and the governor brief the media: BranstadJune13

Hill said the Missouri should reach its widest point in Sioux City by Wednesday. That volume of water should reach Council Bluffs by Thursday or Friday, and get to Hamburg by Friday or Saturday. Council Bluffs has 28 miles of levees and the levees are about five-feet higher than the river is expected to rise.  In Hamburg, workers are adding another four feet to the levee there.  In Mills County, work is underway to ensure the Burlington Northern Sante Fe Railroad’s tracks there don’t go underwater.

Photo courtesty of the governor’s office.