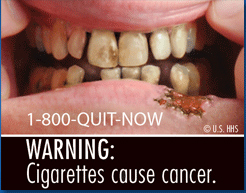 Federal health officials unveiled graphic new warning labels Tuesday that will be required on all packs of cigarettes beginning in September of 2012.

Chuck Reed of the American Cancer Society says the new labels are the first update in 25 years and he likes the fact they are increasing in size.

He says the new labels will cover 50% of the front and back of the cigarette packages, and there will have to be labels on 20% of all cigarette advertising. Reed says he also likes the fact that the smoking quitline number will also be on cigarette packs.

The new warning labels feature photos and drawings which depict the consequences of smoking and the traditional warning that “Cigarettes Cause Cancer.” Reed says every day 4,100 kids try their first cigarette, so the new graphic images will hopefully deter them from smoking. He says the research shows if you don’t smoke as a teen, then you probably won’t smoke as an adult.

Reed says the new graphic labels are just one of the changes in the federal tobacco prevention law. He says the law also bans descriptions for cigarettes like “light, mild or low tar.” Reed says it also prohibits selling what are called “kiddie packs” of cigarettes, which include fewer cigarettes and are cheaper for kids to buy.

It also bans the sale of candy and fruit-flavored cigarettes, all tobacco-brand sponsorships of sports and cultural events and virtually all free tobacco samples and giveaways of non-tobacco items, such as hats and T-shirts with the purchase of tobacco.

If you need help to stop smoking, you can call the quitline at: 1-800-Quit-Now. Or go to the American Cancer Society’s website at: www.acscan.org.