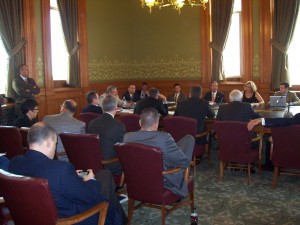 The push to complete that task today has begun, with debate to roll into the late-night hours.  Representative Scott Raecker, a Republican from Urbandale who is chairman of the House Appropriations Committee, says progress was made Tuesday.

“I would personally prefer not to be working past midnight myself,” Raecker says. “However, we have a timeline that may call for some extraordinary circumstances.”

Most decisions on state spending were resolved Tuesday, but a few key policy issues are unresolved.  Raecker still sees an end in sight.

“At some point we’re going to probably have to say,’We’re not going to hold up the budget over this piece of policy language,'” Raecker says. “…But it’s the nature of the process and we’ll deal with it as we can and we’ll see what comes out of it.”

Legislators and the governor have been wrangling over property tax reform since January and House Democratic Leader Kevin McCarthy of Des Moines isn’t sure that can be resolved.

Another last-minute hang-up is the governor’s request for some kind of maneuver that will keep state government operating past July 1, but will allow him a full 30 days to review each budget bill. As it currenty stands, without the governor’s signature on each of those bills, there is no state budget plan in effect on Friday morning.  Senator Gronstal says the governor’s staff has been crafting a proposal.

“Whatever that mechanism is, we are talking with him and we will listen and hear what his recommendation is,” Gronstal says, “and then we will consult with our attorneys as to whether that makes sense.”

However, the biggest stumbling block may be a debate over abortion-related policy.  Legislators are wrangling over that this morning, as Republicans seek new restrictions that would apply to women who’re on Medicaid, and who’re seeking an abortion for a pregnancy that occured as a result of a rape or incest.  Republicans want to require that each of those women see an ultrasound and be told about giving the baby up for adoption before an abortion could be performed.  Democrats have resisted that proposal.