You are here: Home / Fires/Accidents/Disasters / Historic water flows at dam show no sign of letting up 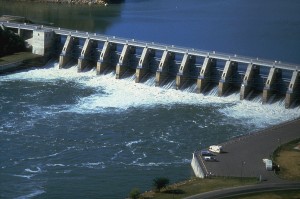 Record water flows of about one-point-one million gallons per second are still jetting from Gavins Point Dam into the swollen Missouri River, with no sign of a break ahead for many weeks.

Dave Becker, operations manager for the U.S. Army Corps of Engineers at Gavins Point, says they are monitoring the structure closely and see no problems.

“We are getting a few less logs and a little less debris which is really a good thing because the first couple of weeks, our crews were pulling in a tremendous amount of wood from the dam,” Becker says. “With our spillway gates open 10 and a half feet, if a tree comes to the spillway, it just goes right through.”

Those logs are a concern as they become projectiles in the swift current that threaten weakened levees downriver.

He says heavy equipment is being used in key areas to prevent erosion from the massive water flow.

“Our crews have put a lot of rock on the shorelines below the dam to try and protect our roads and our access points,” Becker says. “I think we might be at a point where we can reduce the amount of work we have to put in to the rip-rap below the dam.”

The gigantic water fall from the spillway has attracted overflow crowds to viewing areas just below the dam and Becker says they are going to close off part of that area.

“We are going to rope off part of that fishing wall area,” he says. “It’s just getting to be a splash zone to keep people a safer distance away from that. That’s something we’re going to do this week.”

Becker says they’ve had to devote as many as six Corps of Engineers staff people for directing traffic during busy times on the weekends.