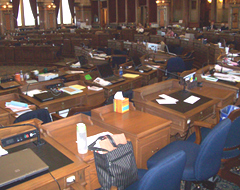 The aren't many representatives in the House chamber as the legislature continues working toward adjournment.

There may be a deal afoot to avert a state budget crisis over a dispute about abortion policy.

Legislators must still approve the final budget bill which will complete action on the entire budget plan for state government for the fiscal year that begins tomorrow.

But action has been held up as House Republicans have been insisting on new restrictions on taxpayer-funded abortions in limited circumstances, like rape, incest or to save the life of the mother. 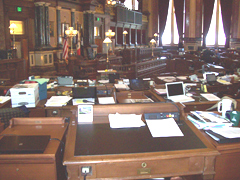 At noon, House Speaker Kraig Paulsen, a Republican from Hiawatha, was reluctant to discuss the details of what’s been going on behind the scenes today. “We’re going to keep working. We’re going to get done today,” Paulsen told reporters. “That’s the objective. I’m staying with that. We’ve got 12 hours to go.”

That’s a reference to midnight. The next state budgeting year begins just after midnight, on Friday, July 1.  Legislators have crafted a bill that makes clear the governor’s authority to keep state government operating for a few weeks before he signs the massive budget bills legislators are sending to his desk this week. By law, Branstad has 30 days in which to either sign or veto those bills.

Early this afternoon House Republicans began a closed-door meeting to discuss a possible way to resolve the abortion-related issue.  All other debates about the nearly $6 billion dollar state budget plan have been resolved.