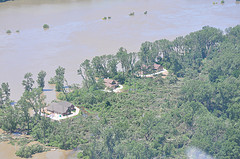 More volunteers are needed to fill sandbags in Council Bluffs as the community fights to hold back the high water of the flooding Missouri River.

Kris Ranney, with the Council Bluffs Volunteer Center, says they also need muscle power to set the sandbags in position over the many miles of levees.

Ranney says, “I think mostly it’s going to include placing sandbags along the levee.” She says volunteers are helping to take a load off the shoulders of city workers who have been working non-stop to keep Council Bluffs safe from the swirling floodwater.

Volunteers will “just trying to help support the city crews as they’re trying to maintain and keep the levees as stable as possible,” she says.

They’re looking for strong men and women to help pack the sandbags and get them ready for city crews, but it won’t be light work.

“It will mostly be a matter of picking up and lugging 30- 40-pound sandbags for placement,” she says. There are two shifts planned with hopes of having between 50 and 100 volunteers per shift.

For times and locations, volunteers are asked to contact the Bluffs City Clerk or the Center at (712) 328-2606.