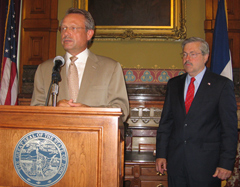 A big financial gift from a Des Moines couple will help the Iowa-based World Food Prize Foundation expand it’s Global Youth Institute to every Iowa high school. Currently, around 70 high schools are represented by the initiative.

Pioneer Hi-Bred president Paul Schickler and his wife Claudia have agreed to commit $400,000 over the next three years to extend the program statewide. “Our goal is also to expand that interest throughout the United States, so we can expose more young people to the food challenges that we have, expose them to the great opportunities that there are in pursuing science, math and technology careers. That’s why we’re doing it,” Schickler said.

He made the announcement today during a ceremony in the governor’s office at the Iowa State Capitol. Schickler says he’s traveled around the globe and has noticed there are several countries that place a higher emphasis on agriculture than the United States.

“The second observation is that we’re falling behind in getting our young people engaged in education and careers that are in the science, math and technology areas. We need to address that issue as well,” Schickler said.

Governor Terry Branstad believes the Schickler’s gift and the expansion of the Global Youth Institute will inspire more young people to get involved in the fight against world hunger. “Another benefit of that is the focus on things like math and science education – which helps develop the future workforce that we need to have in Iowa,” Branstad said.

As part of the expanded program, Iowa State University will host students chosen from each Iowa high school for one day each year and select the top students to attend the Global Youth Institute, part of the World Food Prize festivities, in October. Many of the top students go on to serve eight-week long summer internships at research centers in Asia, Africa, Latin America and the Middle East.