You are here: Home / Politics / Govt / Neither Perry nor Palin will be named on “Straw Poll” ballot 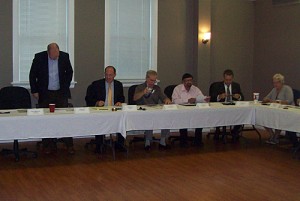 The Iowa Republican Party’s State Central Committee spent a couple of tense hours today debating which presidential candidates — or possible candidates — should get their names printed on the ballot for the party’s Straw Poll in Ames.

The party’s chairman had to cast tie-breaking votes as the committee decided against putting the names of Texas Governor Rick Perry or former Alaska Governor Sarah Palin on the ballot. State Central Committee member David Chung of Cedar Rapids was on the winning side of the argument.

“While Governor Perry, Governor Palin may at some point declare their candidacy, they haven’t,” Chung said during an interview with Radio Iowa. “They may join the race later. They may do well and I wish them well, but they didn’t make the cut for our Straw Poll ballot.”

Steve Scheffler, one of Iowa’s representatives on the Republican National Committee, was on the losing side on this Straw Poll ballot fight.

“I still am of a strong conviction that we should have added Governor Perry because, undoubtedly, he is going to run for president of the United States and we need to give people the widest range of choices,” Scheffler told reporters early this afternoon.

Iowa Republican Party leaders did decide to add the names of candidates Mitt Romney, Newt Gingrich and Jon Huntsman to the Straw Poll ballot, even though all three had decided against paying to participate in the Straw Poll. Six candidates did pay fees to the party and the names of Michele Bachmann, Herman Cain, Thaddeus McCotter, Ron Paul, Tim Pawlenty and Rick Santorum were automatically on the ballot, so the names of nine candidates will be listed.

State Central Committee member Monte Shaw of Panora argued unsuccessfully to have both Perry and Palin included in that list. Shaw said fans of those two politicians do have another option at the Straw Poll, though.

“For the first time, you’re going to be able to go there and write in a name and that will be counted and it will be recorded,” Shaw told Radio Iowa. “So they can still show up and have their voice heard.”

But according to Craig Schoenfeld, the Iowa executive director for a group called “Americans for Perry”, the state party isn’t allowing their draft-the-Texas-governor organization to even set up a table on the Straw Poll site.

“That doesn’t change our focus and our mission which is continuing to educate Iowans about Governor Perry’s record,” Schoenfeld said as he talked with Radio Iowa by phone from a National Rifle Association event; gunshots could be heard in the background.

Schoenfeld said “Americans for Perry” tried to get permission from the City of Ames to set up shop in a park that’s near the Straw Poll site, but were unable to secure that spot either.