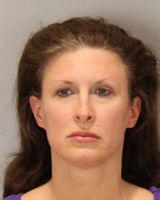 A former northwest Iowa woman was arrested on a first-degree murder charge Tuesday, nearly 10 years after she claimed she shot a man in self-defense.

At the time, Richter told investigators Wehde and another person broke into her home in Early, Iowa and she shot him multiple times to protect herself and her three children. She claimed the second individual fled.

Richter’s husband at the time was out of town, but he had been helping Wehde find work. No charges were filed in case – until now.

Iowa D.C.I. special agent Terry Klooster says investigators began reexamining the shooting in 2009. “And during that time, new information came forward, additional evidence and some inconsistencies were identified that ultimately led to the arrest of (Richter),” Klooster said.

The nature of the “new evidence” that helped crack the case is not being revealed. “I’m not going to be able to comment specifically on that piece of evidence,” Klooster told Radio Iowa. According to an affidavit, authorities believe Richter planted the evidence in Wehde’s car to make it appear he was a home invader. The now 45-year-old Richter was arrested in Omaha, where she has been living for about four years.