The University of Iowa is designating one corner of Kinnick Stadium the “America Needs Farmers” plaza, recalling the stickers former coach Hayden Fry had his players wear on their helmets to support farmers during the 80’s farm crisis.

The university and the Iowa Farm Bureau say they are focusing on the issue again to raise awareness about the “challenges and opportunities” farmers face today.

Fry was on hand for the announcement and said farm kids were important as he rebuilt the Hawkeye program. 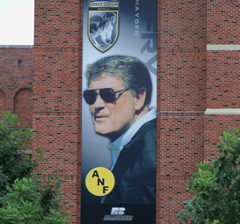 “Coming off the farm they wanted an education, they ended up being good students, every one of them that I know from Iowa graduated,” Fry said, “of course they were strong, because they’d worked on the farm. They were the backbone of our successful teams at Iowa, we built it around Iowa farm kids.”

Fry also recalled a farmer who showed up to their games and critique his coaching. Fry says every time he called a play that didn’t work, the farmer who sat 20 rows behind the bench would stand up and say “Fry you dummy.”

Fry says farming is still as important today as it was then. The university plans an “ANF Day ” on October 15th against Northwestern. The Iowa Farm Bureau is working with the university on the ANF plans. The space between the west grandstand and the north grandstand of Kinnick Stadium will eventually include a bronze plaque that will describe the ANF initiative undertaken in 1985 by Fry.

The U-I athletic department will also create an ANF Wall of Fame inside ANF Plaza. The Wall of Fame will honor student-athletes at the U-I in the sport of football who exemplify “the tenacity, work ethic and character of the American farmer.”