You are here: Home / Health / Medicine / Plan seeks to make Iowa healthiest state in the nation 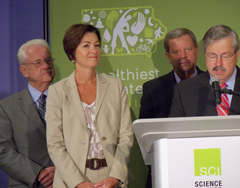 Governor Terry Branstad announced a new initiative today  to make Iowa the healthiest state in the nation in five years.

Branstad says the effort will involve businesses, government, schools, restaurants, grocery stores, faith based organizations, non-profits, health care providers and anyone else who wants to help with “the common goal of making Iowa the healthiest state in the nation.”

He says they are also encouraging other states to set the goal and compete with our state. Iowa has some work to do as the state ranked 19th when compared to other states in the overall “Well-Being Index”

Branstad says the only way to solve the healthcare crisis in this country is to get people to take ownership of their own health. The governor says he saw it happen when he was president of Des Moines University and people completed health risk assessments and then took action to improve their health.

Branstad said stopping smoking is one key in improving the health of Iowans, and was then asked why his administration is cutting funding to smoking cessation programs. He says the tight budget forced them to look at better ways to use the money. He says they are trying to reduce administrative costs and the blanket anti-smoking advertising that he says is not as effective.

Branstad says the Quitnet program that is focused on helping people quit smoking is one alternative he supports. The introduction of the plan comes one day before the opening of the Iowa State Fair — and the governor was asked if he endorses the deep-fried butter, twinkies and host of other high-calorie foods at the fair.

“I’m endorsing going to the state fair and walking a lot,” Branstad replied. He says he understands some people may indulge in some unhealthy foods at the fair, but he says that’s okay if its only one or two days of the year and you compensate by getting a lot of exercise.

Branstad says the idea is to help people make changes on their own — so we won’t see any bans on unhealthy foods. “We’re not looking at doing punitive things, telling people what they can’t do, we’re rather trying to identify positive things that people can do to make a difference in their own lives,” Branstad says.

Branstad says it’s a private initiative supported by the state. Insurer, Wellmark Blue Cross and Blue Shield, is kicking in $25-million to the program to fund 10 cities in the state called “Blue Zone Communities.” The selection of those communities will come later this year and they will get help in making the community healthier.

The Hy-Vee grocery store chain is also involved in the program. First Lady Michele Obama sent the governor an e-mail supporting the initiative as part of her national goal to make Americans healthier.