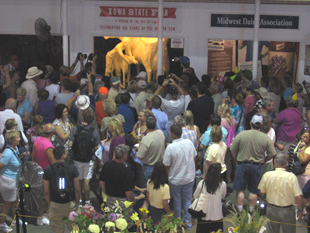 People gather to see the butter cow at the Iowa State Fair.

The State Fair’s most iconic figure and even President Obama were among the write-in votes at this past weekend’s Iowa Republican Party Straw Poll in Ames.

“There were votes for the Butter Cow. It happens in every election, just random votes that didn’t equate with a person,” says Iowa Secretary of State Matt Schultz, a Republican who oversaw the Straw Poll balloting.

“Most of them were fictitious characters.”

Schultz and his fellow counters used existing state rules for primaries and the General Election to sift through the votes cast in Saturday’s Straw Poll.

That means anyone who spelled Texas Governor Rick Perry’s name with an A instead of an E had their vote counted as a vote for Perry. Comedian Stephen Colbert of cable television’s Comedy Central had used money from his “Super PAC” to buy ads on Des Moines TV stations, encouraging a write-in campaign for Rick Parry.

“That’s Parry with an A for America, with an A for Iowa,” Colbert said as he narrated the ad, which was paid for by his “Americans for a Better Tomorrow, Tomorrow” PAC.

The secretary of state says that wasn’t the only way Perry was misspelled.

“There were people who spelled Perry P-E-R-Y instead of two Rs, so there were several variations,” Schultz says. “To be honest with you, I don’t exactly know how many (PARRY and PERY votes there were), but I do know those were all given to the governor.”

A supporter of another well-known politician misspelled that name, too.

“There was a vote for Sarah Palin with the letter Y,” Schultz says. That means someone voted for Paylin

Almost 17,000 Straw Poll votes were cast. Palin was among the 218 votes reported as “scattered” votes by the GOP. The State Fair’s butter cow and Obama were part of that group along with Palin.

Party organizers rented 10 electronic voting machines from county officials to use for the voting. Write-in names had to be counted by hand.