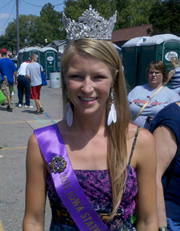 It’s been a wild ride for a teenager from northwest Iowa in Des Moines this week. Radio Iowa’s Pat Curtis tells us about 2011 Iowa State Fair Queen Paris Schnepf:  2011 Queen :51

Paris Schnepf, a 17-year-old senior at Spalding Catholic High School in Granville, was crowned the 2011 Iowa State Fair Queen one week ago, beating out 100 other contestants.

Since then, the first State Fair Queen from O’Brien County has enjoyed superstar treatment – signing autographs for little kids, landing backstage passes to grandstand shows and taking in free corndogs and funnel cakes.

Schnepf is loving her time in the spotlight. “It’s so much fun. You get to see so all the odds and ends of the fair I’ve never seen before,” Schnepf said. Paris is the daughter of Richard and Sharon Schnepf. She plans to attend a four year university and pursue a career in the music business.

“My favorite thing to do is song write and compose my own songs,” Schnepf said. “I play guitar and sing. I play piano, alto saxophone and the mandolin.” Paris will return to Granville with her crown, sash and a $2,800 scholarship. She’ll also have a few duties over the next year as State Fair Queen.

That’ll include speaking engagements, attending Fair Board meetings and serving as a representative for the Iowa State Fair. Paris is on the cross country, basketball and softball teams at Spalding Catholic. She also serves on the student council and is on the National Honor Society.