You are here: Home / Recreation / Entertainment / Wheels in motion on big skateboarding park 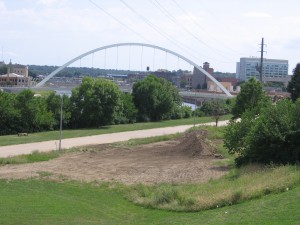 Plans are in the works for Iowa to become home to one of the largest skateboarding parks in the country. Listen to report from Radio Iowa’s Pat Curtis:skate park :55 mp3

Kevin Jones, who manages Subsect Skate Shop in downtown Des Moines, says the park will cover roughly two acres and should draw teens and young adults from across the state.

The City of Des Moines has donated the land. Colby Carter, a skate park designer from California, visited the area Monday to begin drawing up plans. Jones says there won’t be another park like it in the Midwest. “Not for the size. There’s a really good (skate park) in Davenport, but this one is going to be a lot bigger,” Jones said.

A private fundraising campaign will be launched once the design plans are complete. Jones estimates the park will cost around $2.5 million. He’s hoping a corporate sponsorship can be secured.

Jones said he believes the skate park fits right in with Governor Branstad’s recently announced initiative to make Iowa the healthiest state in the nation. “I mean, here, we’re talking about building a skate park, getting kids active and doing stuff. So, I think companies would be very excited to get involved with the skate park,” Jones said. The proposed site is located near Wells Fargo Arena.